Our client Richard, wanted to make his friend Joe’s party one to remember, so one of his friends recommended the Hog Roast Bootle team. He told him that they had an event which was catered by us before and it was unbelievable, so Richard expected a good service! Joe is a boxer who works very hard and takes his training very seriously, he had been training for two years and last week, Joe finally had his first amateur fight. His whole gym came out to support him, there was just over one hundred people who showed up, from coaches, training partners, friends and family, they are cheered when he had he first well-deserving win! 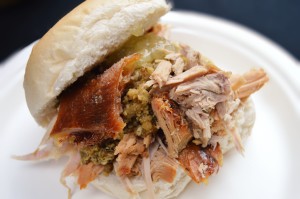 Joe had trained for six weeks straight on a strict diet, so they wanted the food to be excellent and top notch, so he could finally enjoy a good meal. After the fight itself, we took him to our local community centre where Hog Roast Bootle had set up perfectly! The balloons they provided were all in place and the food smelled amazing even before they entered.

We welcomed them in and congratulated Joe personally on his big win! Joe was over the moon with the event, and couldn’t stop going back for more food! He jokingly said he must have put on an extra stone by the time he left! We made sure that everyone was satisfied and we were told numerous times how moist and perfect the pork was. The event went down a storm and so did our food, it made Joe’s big night even more memorable. Richard stated that the price was very reasonable considering how much food there was and the overall service, he left by saying he “would one hundred percent recommend the Hog Roast Bootle team, you guys are amazing!”